I’ve thought a lot this weekend about invalidation and what it means to me.  Before going to therapy I hadn’t even heard the words “invalidation” or “validated”.  After a while I understood the meanings but to be totally honest, put them down to being airy-fairy therapy words and definitely not words that I would use myself.  Fast-forward 3 years or so and invalidation is a word that seems to be coming out of my mouth A LOT.

When I ended up having THAT row with my mother in October, what I wanted and needed from her was to be validated.  I was screaming (literally) for her to finally see and hear that I was hurt. That I had a lot of hurt and pain inside of me that I was desperate for her to see, acknowledge, apologise for causing and help me to heal from.  What I got instead was total invalidation.  She went on the attack and listed off my faults, invalidated me by making me feel overly sensitive and pathetic for having these feelings and then insulted me by saying I was crazy and needed sectioning as I was brainwashed (I guess this was gaslighting as it made me question my sanity).

A few days after THAT row, she text me to say how upset she was.  She sent a few long messages, all of which were totally invalidating.  One actually said “You say you had a bad childhood?” the tone of which instantly suggests it’s an opinion rather than a fact, and then a question mark like she’s questioning I could even SAY that!  She continued “but we always had a nice house and you didn’t go without much considering I was a single parent with no help from your dad“.  I should be grateful, after all I had a nice house (which is actually laughable as I moved at least 22 times before I was 16, doesn’t mention that I lived with 2 physically violent men AND a paedophile but hey, moving on…) she then goes on to blame my dad for not supporting her and the end result is that I should feel LUCKY rather than hurt.  As for the “didn’t go without much” well, that is questionable.  Personally I feel like I went without all of the most important things a child needs like love, protection and safety.

Another few months later she sent an angry text and in it she listed all of the ways she “was always there for” me “unlike some” (this is another dig at my father). She went on to say that it couldn’t have been that bad as I didn’t move out when I was 16 and never go back. She then said in fact, I went home a few times and that they always let me return and helped me with most of the things I needed.  By that she will mean money, physically helping me move house and buying me things like an iron etc.

Then came her “goodbye” text which said she was no longer waiting to hear from me and would deal with that in her own way.  She told me to be happy and that she hoped I didn’t regret my decisions as time was precious.  She also made sure to get in a few shitty comments about how I could “believe what I like“.  This one very nearly worked, I did begin to seriously question if any of my pain and hurt was worth losing my own mother over.  Perhaps I really should be over it by now?

And most recently, a few days ago, she says she wishes she could “wrap her arms around me and hug away the pain and hurt” and that she will always be there for me, if and when I need her.

Every message stinks of invalidation.  The last one is clever though as on the surface, there’s some validation in it, right? She’s FINALLY, FINALLY seen that I even have hurt and pain?? I still find myself hopeful about that to an extent, but where is the acknowledgment of what that pain and hurt is about? Nowhere. So what is she actually acknowledging? That I have hurt and pain from somewhere/someone else? Or that I am mentally struggling at the moment? I don’t know but it’s not right I know that.

Then flying monkey who arrived Wednesday night – well, quite frankly that twat just invalidated my entire life.  He invalidated my experience of my childhood, my mother and my current adult feelings about it all. He told me to move on, draw a line under it, told me that I was an adult now (so I assume should grow up?).  It was horribly invalidating. He also told me that as he experienced a terrible childhood himself, he knew how I felt about certain aspects but that I should still “draw a line under it“.

My sister told me that my mother was very upset and crying all the time – so clearly her feelings were more important than mine. When I told her my boundaries for any future relationship between us, her response was that she didn’t understand the need for “rules” and got visibly annoyed and upset.  She said it was weird.  So now my boundaries were being ignored too.  Not to mention I told her NOT to bring her dad with her, yet she still did. How rude is that? Still gets my back up.

So there is the background to my recent experiences of being invalidated.  What I am struggling with at the moment is what I experience when this happens. I see red.  Like, a red mist. I become so very overcome with anger that I genuinely worry I won’t be able to control myself and this is SO unlike me. I have never been a particularly angry person, I would not describe myself as angry or aggressive and I am certainly not violent, ever.  But in these moments, I could totally lose my head.

I keep reading on forums, blogs and articles that the best thing to do is to not react. Particularly, not to react emotionally.  Keep calm, don’t “JADE” (Justify, Argue, Defend or Explain) yourself and to basically validate yourself so that it doesn’t get to you.

But I don’t seem to be able to do this yet.

Why has this become such a huge trigger for me? I mean, I guess looking back I’ve spent my entire life being invalidated so why now is that so completely unmanageable?

The other HUGE trigger for me at the moment is the comments on my therapy.  Flying Monkey Wednesday night compared my therapy to “a cancer eating away at you“.  My mother said I was “brainwashed with my therapist” my sister said “it’s gone to your head” and when on Wednesday, at the ambush, I implemented my boundary and said I would not discuss MY private counselling any more and neither would I allow it to be discussed or insulted again, I was met with such shock and confusion such as the wonderful “You are so angry, I’ve never seen you with so much anger and you are so defensive!”.

So the two toughest things right now are the complete invalidation of my feelings but also the invalidation that 1) therapy is helping me and 2) that therapy is PRIVATE and not something I wish to hear their (negative) opinion on! oh and that it isn’t making me crazy.

I seriously need to try to find a way to handle this more effectively otherwise I’ll be in prison for murder.  One of the most annoying things about the reaction that it gives me is that I probably play right into their hands – “proving” that I am crazy and fiercely angry and aggressive.  UGH.

Invalidation for me means:

The only thing I am glad of is that all of this invalidating is making me angry and not doubt myself.  I guess that is a good thing? Hopefully this will be a work in progress and eventually their invalidation won’t matter to be at all.

Hopefully my own validation will be enough. 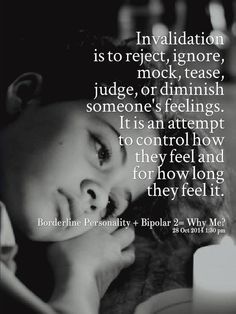